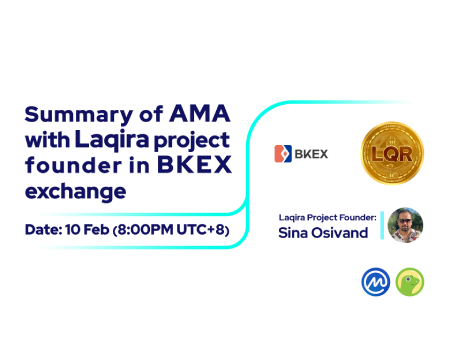 I am Sina Osivand, the CEO of the Laqira project. I have been working in Forex since 2009 and I have been in the field of cryptocurrency since 2016. Given the technical and scientific support needed for the token launch, I decided to launch the Laqira Protocol project to help develop blockchain technologies and make money for the general public.

2. You said that you are the CEO of the Laqira Protocol Project. Please explain the project and the fields it includes?

The Laqira Protocol project team started working almost 3 months ago with the focus on activities in the field of gaming and Metaverse on a blockchain platform. The token is currently listed on BKEX and PancakeSwap exchanges and can be traded. All Laqira protocol programs are summarized in the following slogan:

A Metaverse Complex, Tunneling Between People on Earth and Blockchain-Based Technologies

In fact, the ultimate goal of Laqira Protocol is to create a multi-purpose platform with the aim of meeting all the needs of the users in the field of blockchain. The Laqira Protocol team, regardless of the focus of their activity (Game and Metaverse), intends to provide all blockchain services to its users by creating such an atmosphere, so that the user does not need to refer to other decentralized software (Dapp). These include creating NFT Marketplace, Game, Metaverse, DEX, CEX, etc.

3. You mentioned that you are trying to identify the basic needs of your users and take steps to address them. The question is, how do you specify the needs of the users in your team?

The Laqira Protocol Project is a community-based one in which holders make decisions about the future of the project by creating and voting on their own proposals or those of the core development team. This system will be available to users soon. As for the starting point of the activity, it should be stated that because the focus and origin of Laqira Protocol activity was the game, Metaverse and NFT, it has already taken the first steps. The voting system for future developments of the Laqira Protocol will soon be available to the users and project holders.

4. How did the name and idea behind the Laqira Protocol come about?

The name Laqira is derived from the concept of parallel worlds and quantum physics, which was chosen because of the close relationship between the nature of the project, that is metaverse, and the concepts of parallel or virtual worlds.

5. Well, we have invited you here regarding the current event that you intend to hold with the cooperation of BKEX Exchange in support of the SQUID Community. Please talk about the event?

Yes. As you mentioned, this event will be held in collaboration with BKEX as our official partner and in support of the SQUID community. We believe that all blockchain users are members of the same family, and that the problem of a community is in fact the problem of all cryptographic and blockchain communities. That's why we decided to take a step to support SQUID users to prevent frustration and the disappearance of the project-friendly community and try to be the starting point in the development of this community-based project. Actually, we have organized an event that is completely in the form of a Squid Game movie. In fact, people first register for this event which at this stage includes 4 phases and 4 different games that will be held on 4 different days. At each stage, those who earn enough points will be allowed to participate in the next stage and play the next day, and the rest of the gamers will be banned. In the final game, the first 20 people will be announced as the winners of this competition.

6. In your poster, you have introduced BKEX Exchange as your official partner. What was the reason for this choice?

There are several reasons for this decision. The most important reason is that we know the BKEX exchange team for a long time and trust it. Also, this exchange is the first exchange in which LQR was listed. In addition, with the cooperation of Laqira Protocol team and BKEX team, the price of LQR reached 50 times the initial supply price on the first day of listing in the exchange. That is why we declare this team as our official partner.

7. What are the registration terms and conditions for this event?

Everyone is able to participate in this competition. The requirements for the game registration include holding 200 LQR tokens and 200 SQUID tokens in the registered wallet, as well as having at least 0.011 BNB to pay the network fees. Note that the token holding is only needed for registering in the competition and after that, the gamers are allowed to store, transfer and sell their tokens.

8. How can it be proven that the awards have been transferred to the winners’ wallets?

9. What are the game awards and how will they be distributed among the winners?

The main prize of the contest is 10 BNB units, which will be increased to 0.0025 BNB units by each user registration. The way the awards are split among the winners is as follows:

Also, for every 1000 people who register in the game, 1 person will be awarded a 0.1 BNB by drawing lots.

10. Will this event continue for a long time?

Since the Laqira Protocol project is a community-based project, the continuation of these competitions depends on the level of public acceptance of the current event.

11. What are the next programs and projects of Laqira Protocol supposed to be?

As mentioned before, this project is community-oriented and its future depends on the decision of the project holders, but in the initial stages, projects other than the current SQUID event are under development, including Laqirace Game, NFT Market place and DEX which will be available to the users soon. For more information, users can visit our official website at https://laqira.io.

12. Does your project support staking program? If so, please tell us more.

Yes. LQR tokens staking is currently available on BKEX Exchange. Users can benefit from 24% annual profit by visiting this exchange and deposit Laqira and stake their tokens through this exchange.